As a set collector and one who tends to be a 'completist', I'm faced with the dilemma of deciding on which variations, errors and ancillary cards I'm going to chase. In a nutshell, my rule is 'if it came in a pack and the kid version of me would have noticed it, I'll include it'.

'62 Green Tints? I included the alt poses and "extremely green" variations. The 1959 'traded line/no traded line' cards? Nope. 1974 red-bordered checklists? They came in packs, so I have them in the binder. The '73 blue border checklists? Meh, they were mail-off things for the most part, limited distribution items at best. I have a few but don't care if I nab all 24.

There were four of them with dates ranging from May through July. Simple idea...guess the scores of two games on the indicated date and win prizes. Each of the cards listed a different set of prize choices although a 'Spalding Fielder's Glove' was part of all four. Here they are with the actual scores of the games (from Baseball-Reference) and the prize I would have chosen. 😁 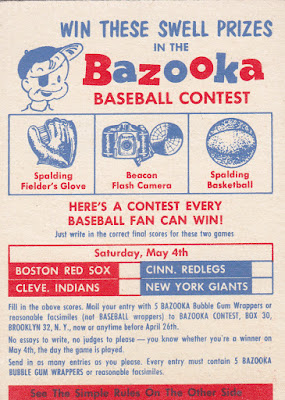 I'd have wanted the glove. Sidenote...my first glove was a Reach Al Smith model.  Looked just like this one. Back to the contest cards. 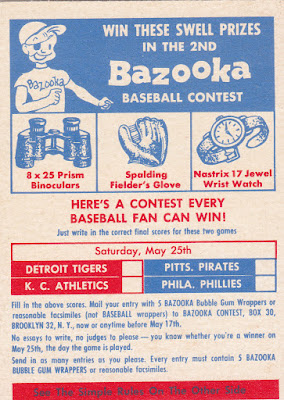 Having won the glove, I'd be down for the watch for sure. I loved watches.

Of note is the Orioles' 12-0 win over the Red Sox. I guarantee I'd have picked that exact score had it been an option and I had a card to send in.  👆😇 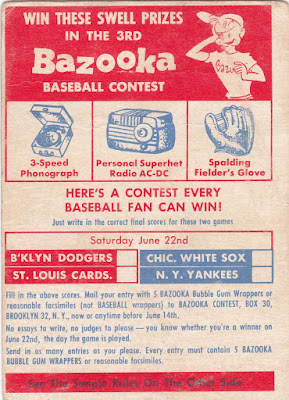 This would have been a VERY tough choice for me. Radio or record player. I'd have gone for the record player as I always wanted one of my own. I remember getting one for Christmas in the early '60s. And this boxy-looking case to carry around my collection albums. Good times. 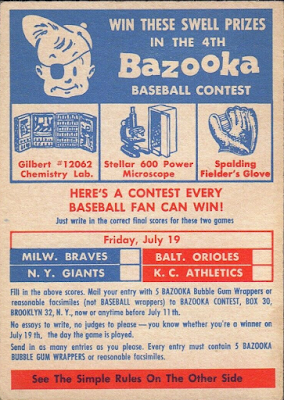 I had a microscope and I had a chemistry set as a kid. I really enjoyed the microscope. That would have probably been my choice.

Here is a closer look at the instructions on the card:

The reverse was nearly the same on all of them except for the prizes listed and the large, faint game number behind the text. 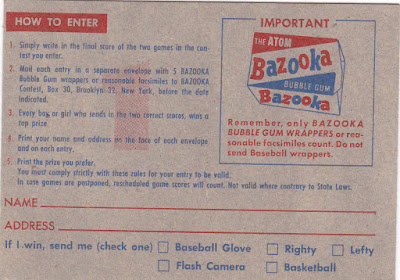 The checklists are more expensive and I don't know when I'll look into adding the three I lack. I was lucky to stumble across a reasonable copy of Checklist #1 at a good price but the rest are tougher. Since I'm not involved in a set chase at the moment I might do some digging. I'll be happy to add one of the three this year.