First I wanted to thank the many of you who expressed concern about our situation here in the Houston area. This blogging community is a very supportive and caring one to be sure.

Just a quick update. My area took the brunt of two heavy bands of rain on Sunday, one around noon and the other which came thru before midnight. This afternoon we watched the water come up in our street and while it made the intersections at the ends of our block impassible it never came anywhere close to getting up even over my curb. Tonight's water assault was quicker and somewhat milder. Thank God I had the foresight to pick the highest house in the subdivision back in 1983. ,-)

The silver lining in all this is that if this sumbitch doesn't flood this week after 50 inches of rain I'll save $350 a year because I sure as hell would have no reason to renew my flood insurance!

The outlook for Houston is for more rain bands to spin theu the area until sometime Wednesday by which time this zombie storm will have (supposedly) passed to our east. We will see. Meanwhile I've gotten word that my school district is closed all next week. Honestly I'd be VERY surprised if my school isn't under water. It sits very low and close to Galveston Bay. Our parking lot floods if two dogs pee on our bushes at the same time.

But enough of that. Let's post something shall we? This card arrived in my last mail delivery which seems like a long time ago. I bought it after seeing a sweet Whitey Ford from this 2003 Topps set on Fuji's blog the week prior. 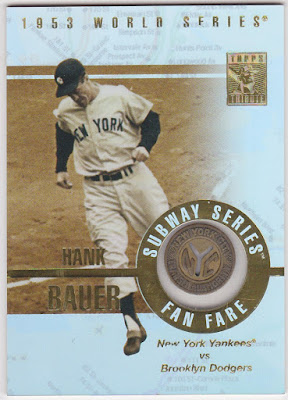 Not much to say and I'm too tired to type much anyway but I absolutely love this thing. I have a huge sentimental attachment to the NYC Subway and I have some old tokens in a subway themed shot glass on my shelves. 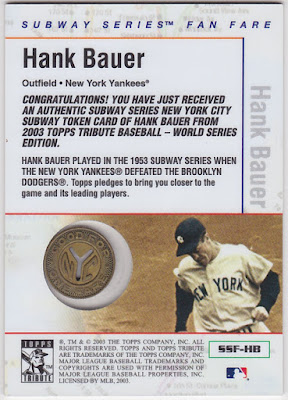 The 1953 'Subway' World Series between the Yanks and Dodgers was the first one played in my lifetime. (I missed the '52 series by a couple of months.)  Plus I dig Hank Bauer so it was an easy pickup for me.

I'll post again later in the week. Meanwhile I have a ton of blog reading to get caught up on.

And thanks again for your thoughts in a trying time. BTW...while we are fine and hope to stay that way there are a whole lot of people in Houston that are going to be in dire straights for the foreseeable future. Send them a prayer if you are so inclined. See ya soon!
Posted by Commishbob at 1:10 AM