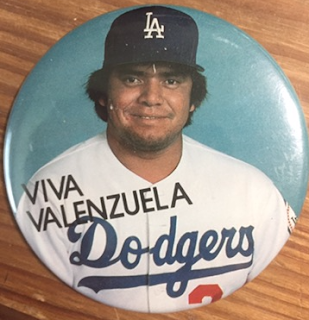 My wife was going through some shoe boxes of mementos that she came across one evening last week and found (among some other interesting things) this Fernando Valenzuela button. In 1981 Fernando arrived with a splash after being named the Dodgers' Opening Day starter as a replacement for the injured Jerry Reuss. Most everyone knows how his career blazed across the baseball universe after that.

Even my Mexican American soon-to-be father-in-law was caught up in Fernandomania. He'd lived his whole life here in Texas but had never been to a baseball game (or pro sports event for that matter) until we took him to see Fernando pitch in the Astrodome late in the 1981 season.

Don Sutton out pitched Fernando that night and the Astros won but that didn't dampen the festive mood or ruin our milestone family adventure. I think we bought him that button in the Astrodome gift shop during the game. Back then the Dome and every other park I visited carried caps and other items from every team in the majors so finding a button of a member of the Astros' division rival probably didn't surprise me.

I hadn't thought about that night in a long time. I saw my father-in-law last week and I meant to ask him if he remembers going to that game. He's 91 now but still sharp as can be so I'm betting he does. I remember sitting that night down the left field line near the foul pole and how impressed he was with seeing the inside of that impressive building he'd seen from the street many times.

I believe the last time I saw Valenzuela pitch in person was in the 1986 All Star game when he struck out five straight AL hitters (Don Mattingly, Cal Ripken, Jr., Jesse Barfield, Lou Whitaker and Teddy Higuera) to tie Carl Hubbell's record set in the 30s.

Fernando had some cool cards in his day but I really like this Stadium Club from a year or so back. Greatness. 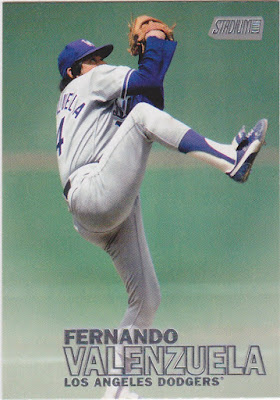 Posted by Commishbob at 7:45 PM