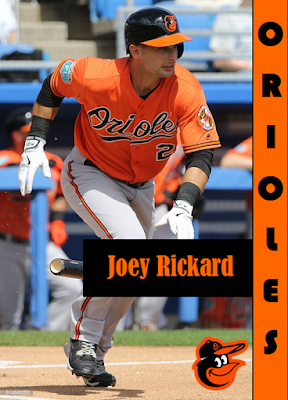 My insistence (obsession) on having a card of every player on my fantasy teams as soon as possible has led to me overspending on minor league cards, Korean cards and other people's customs. I've bought complete sets in the past just to get one card. Yes, I'm an idiot.

So when I picked up rookie Joey Rickard I went looking for cards on the net. I found his minor league cards in sets but nobody had singles. Since I know he'll likely be included in a mainstream set sooner or later I decided to just save myself the cash and make a card for him. I've done that before but usually only for long retired NFL guys who never made a set of any kind.

I have Photoshop Elements but a) no PS skills and 2) no time to fiddle around with it so I stuck to trimming pics in IrfanView (freeware), compiled it with  MS Publisher, and tweaked it in MS Paint. I had to put his name where you see it to cover the photo's watermark (naughty me!). And I'd change every font and be more creative with the reverse if I was doing to do it again but it'll do for now.

Designing and putting it together is the easy part. The hard part is cutting, trimming and then sticking the back (printed on sticker sheets) to the front. Trust me, practice DOES NOT make perfect. But whatever. I have a Rickard card that'll do until something better comes along. And it only cost me a sheet of glossy photo paper, a sticker sheet and some printer ink. I feel like I just took the first step in a 12-step program. 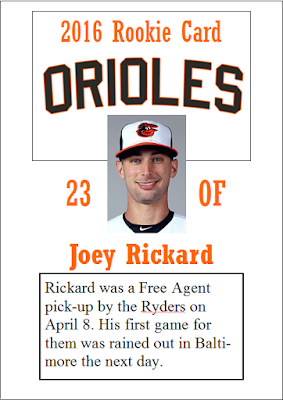 Posted by Commishbob at 9:18 AM