I've been off the grid for awhile. I hope to remedy that with posts of the vintage cards I picked up at the last monthly card show I attended.

The show always has a lot of cheap vintage boxes. I'll hit up the dime, quarter, fifty cent and dollar boxes. The ten cent stuff is frequently 90's junk so I concentrate more on the others. The fun part of digging through those boxes is that I can spend five bucks at the show and come home with a nice-sized stack of cards I picked up just for the hell of it. Cards that I grab for no reason other than they strike my fancy or bring back a memory of my hobby youth.

I was a catcher back when I was a kid, Little League, Babe Ruth League, etc. Then I wised up and moved to first base. But I still have a soft spot for cards that show catchers mitts. I still have a couple of my old mitts stored away. I got Sanguillen's sig on a program at Shea Stadium once. If you didn't know who had signed it you've never guess it said 'Manny Sanguillen'. I remember laughing about the fact that he may have written "Go Bleep Yourself, kid' and I'd never know by looking at the scribble. 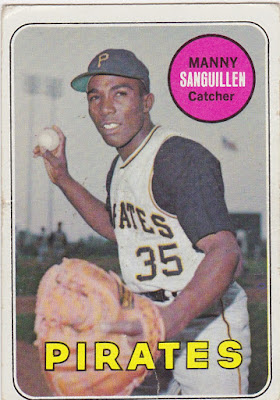 Rico Petrocelli had a brother who was a Yankee Stadium usher (or security guy, I forget). That brother told us he was 'authorized' for sign Rico's autograph for him. Never took him up on it. 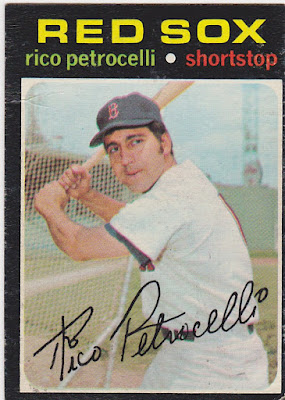 Clint 'Scrap Iron' Courtney. One of the great baseball nicknames. I wish the other kids had called me 'Scrap Iron'. In high school I was called 'Piano' for awhile because our coach swore I was carrying one as I ran the bases.

I will admit to altering some of my cards as a kid to 'update' player movement. I don't think I re-bought my own '58 Courtney though. Doesn't look like my handwriting. 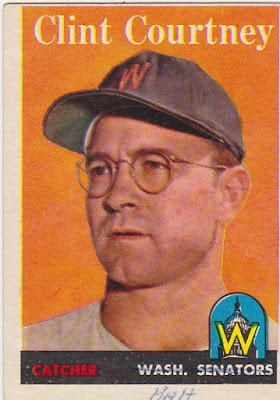 If I had a buck for every card I own that shows the old Yankee Stadium scoreboard I'd be very wealthy. I loved these White Sox road unis with the white lettering. I wonder if they ever use these as a throwback. 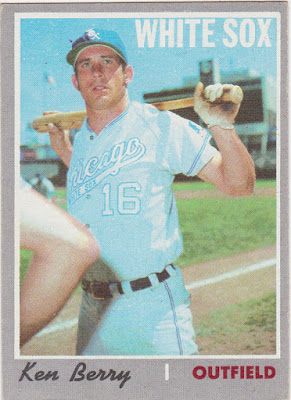 Bobby Wine looks odd to me as an Expo even though I saw him play at Jarry Park. He was the Mario Mendoza of his era.  But he owns a Gold Glove from 1963. 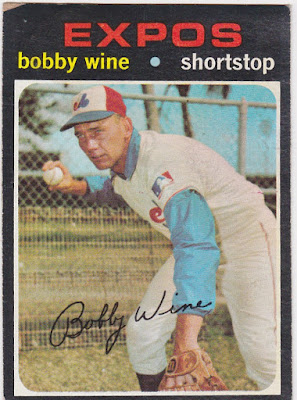 I guess Gil Hodges will never make the Hall of Fame now. That was a lively topic for awhile but the Bonds-Clemens-Rose debates have pushed Gil back into the shadows. That's a shame because I think he belongs. And his job of managing the 1969 Mets still ranks among the best of all time. Even though it killed my soul. 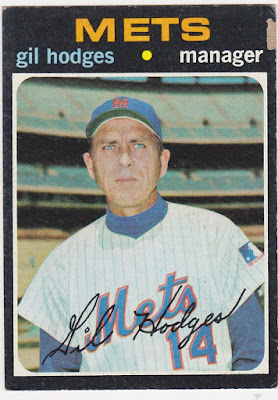 Speaking of the '69 Mets....another great nickname belonged to Ed Charles. He was called 'The Glider'. I can hear their broadcasters' (Bob Murphy, Ralph Kiner and Lindsey Nelson) voices in my head using his nickname. I love this card, btw. That gold and green, Yankee Stadium, the Glider's smile...awesomeness. 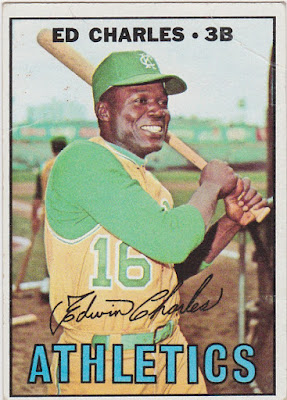 I've got plenty more but these are all I have scanned for today. Cheap vintage rules!
Posted by Commishbob at 9:30 AM