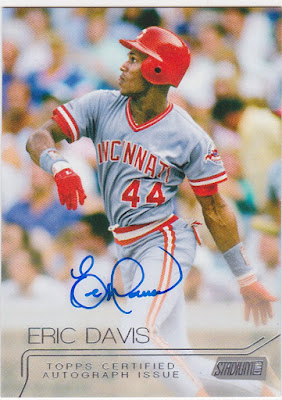 I ordered and opened a box of 2015 Stadium Club. Not being that familiar with contemporary sets I thought I'd come closer to having a complete set when I added in the cards I already had. But I guess I'll just keep digging.

I'm not going to post any regular cards for the '15 SC set. they've been all over the blogs for a year now. But when I get something I think is worth scanning it'll show up here.

The highlight of the box by far was the Eric Davis autograph I put at the top. I always enjoyed watching him play for the Reds and was very happy that he brought his talents to the Orioles during his 'second career'. Davis of course fought and defeated colon cancer at an all-too-young age and returned to the game after missing the 1995 season.

The other auto was this one: 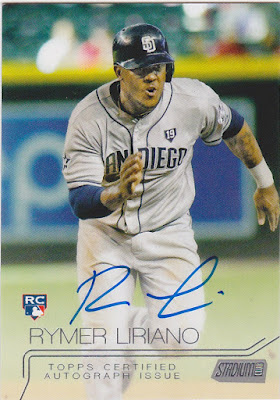 Not only do I not know who he is but that's a very, very lazy sig. A waste of cardboard and coating.

I got a handful of the various subsets. I got two or three of the die-cut cards. I'd rather take a stick in the eye than mess with those things.

These two True Colors cards aren't bad. Shiny, multi-dimensionalish (I made up a new word?) and very different than anything else in the box. A kind of 1992 vibe for me. And I don't mind a Mays card. And anything is better than die-cut. 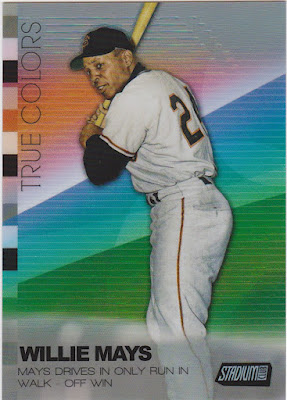 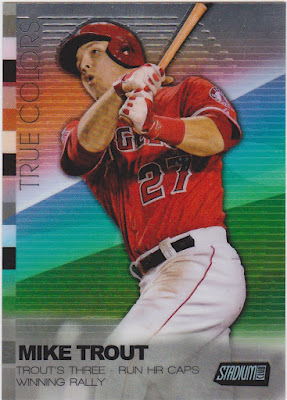 I got more dupes than I counted on so they are off to a couple of SC collectors. I'm hitting the TriStar show this weekend to 'Tri' and fill a few holes in this set.
Posted by Commishbob at 11:34 AM