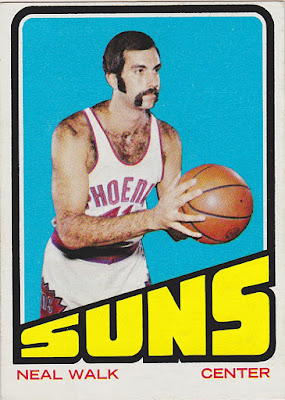 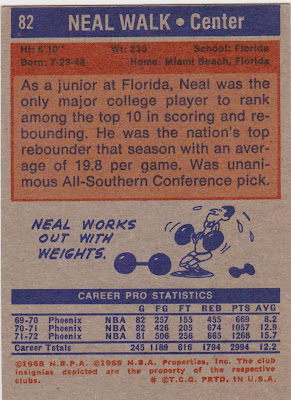 Neal Walk played collegiately for the University of Florida and when he finished he held about every hoops  record they had. He has the most 30+ point games in the schools history and has the two highest season rebound totals. In 1967-68 he averaged nearly 20 boards a game. His uniform number is still the only one the Gators have retired.  He was drafted by the Phoenix Suns in 1969. The Suns lost a coin flip with the Bucks who then picked first and chose Kareem Abdul-Jabbar. Yikes. THAT was certainly a history shaping flip!

Anyway, Walk played seven full and a partial season for three different NBA clubs and them continued his career in Europe. And, as the cardback says, he worked out with weights!! That wasn't as common as it is today apparently.

Later Walk suffered a tumor on his spine which eventually led to his being wheelchair bound but it didn't cool his competitive fires as he played wheelchair basketball in the National Wheelchair Basketball Association. He was honored by President Bush (the first one) as 1991's Wheelchair Athlete of the Year.

Which brings me to my story. As I talked about in my last post my college friends and I enjoyed Rockets' games in Hofheinz Pavilion in the early 70s. One night with Phoenix in town we noted with some humor that Suns' center Neal Walk had a particularly heavy dose of body hair. Being the knucklehead that I was I waited until a quiet moment in the game, a timeout as I recall, and I stood up and yelled "Hey Walk, take off your sweater!!"

Now I may have actually heard or read about a similar comment hurled his way in other arenas but I can't recall. I may have just made it up on the spot. But either way it certainly brought great amusement to everybody in the place and to many of the Sun's bench players as well. I don't recall Walk's reaction but I was told by my friends later and down through the years that he was grinning.

I'm sure my Mom would have been proud of me.
Posted by Commishbob at 7:30 AM