Close Encounters of the Basketball Kind 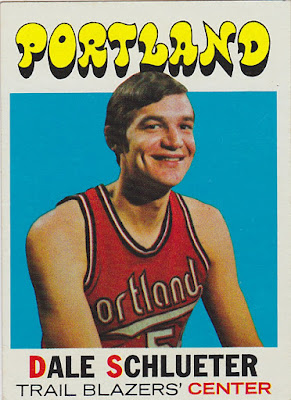 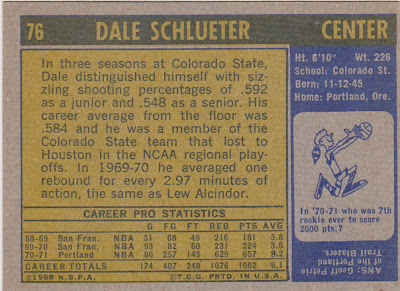 I haven't followed the NBA in about thirty five years. My friends and I took in Rockets games pretty regularly in the short time they played at Hofheinz Pavillion on the University of Houston campus. Tickets were a buck for UH students so it was a very cheap night of entertainment. But generally the Rockets sucked and we had to get our jollies by riding them, or even better, the opposing team.

There was never any doubt that the players heard us. We'd sit behind the visitors' bench or in the front row across the floor. Hell, the place was so laid back and empty we could have probably sat at the end of either teams' bench without much fuss. And since I worked in the building at times I'd sometimes come down the ramp and watch from behind the goal standards.

It was about 1972 when Dale Schlueter played in Hofheinz as a member of the 76ers. He was a big center with zero 'hops'. I mean zero. I doubt his shoes ever got more that two inches off the floor. And we flat wore him out over it. Add to our drunken voices the fact that there were maybe 1000 people in the place and you had a case of six or so college fools pretty much acting as the life of the party.

And so at one point Schlueter comes behind the empty press row right in front of us to retrieve a loose ball, looks straight at poor innocent me and says 'Up Yours!!' I kid you not. And shockingly he's giving me the finger while hiding it from the court with the ball. Sweet Mother of God. I've been flipped of by an NBA player during a game!!

That moment has been a recurring source of hilarity among my buddies at get-togethers and golf rounds ever since. I found this card (and a couple of others) for about a buck on eBay. Brought me a laugh for sure.

Here's to you, Dale Schlueter. Long may you wave!!

Next time: Furry Players and another Close Encounter