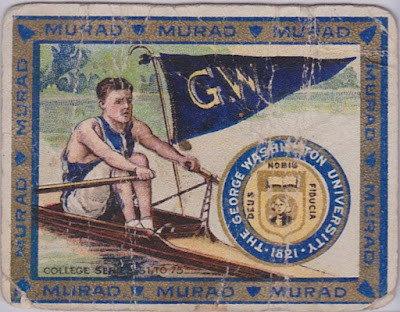 Cards this beaten up are kind of like 'cave paintings'. They are not nearly as nice as they were when they were created but you can still appreciate them today. This is from the circa-1910 series of Murad cards issues as premiums with cigarette purchases. I find them unique in that they cover such a wide range of both schools and sports. I mean how many college rowing cards from a century ago are there? These smaller cards, cataloged as T51, have a larger sibling which carries the T6 designation.
But I bought this one in particular because my Dad was a loyal George Washington University alum, Class of 1951. He attended on the G.I. bill, joined Delta Tau Delta fraternity and was called 'Pops' by his fraternity brothers because he was four years older than most of them since he had been in the service.
After I bought the card I was looking over the checklist (this card is part of the third series, 51-75) I saw that one of the schools listed on the back is Juniata College in Pennsylvania. My mother grew up just a few miles from the campus. Just a bonus that added to the card's appeal for me.
I doubt I'll collect others from this set although there are some pretty nice ones available. The bigger name schools' cards are costlier than I'd be willing to pay. But as a cool card representing my father's school, I sure like this one.
Posted by Commishbob at 11:14 AM