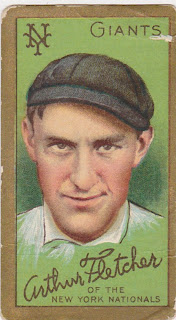 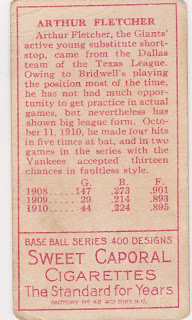 Here is my latest eBay pickup. These 1911 'Gold Borders' are a favorite of mine. There are some obvious flaws but only one encroaches on the card past the border. I'm far from being 'condition conscious'  so I'll pick these up all day long and twice on Sunday. At $16 shipped I couldn't pass it up.

Art Fletcher was just establishing himself with the NY Giants when this card was issued. He went on to be the Giants' starting shortstop for a decade, finished with the Phils and then became their manager.


Fletcher was John McGraw's shortstop for over a decade, providing the Giants with brilliant fielding, dependable hitting, and on-field leadership. A caustic, belligerent copy of McGraw during the game, off the field he was a non-profane, churchgoing family man. As the frustrated manager of four second-division Phillies teams, Fletcher's final gesture was the drawing of a caricature of umpire Bill Klem as a catfish, a comparison the jowly, heavy-lidded Klem loathed. Fletcher became Miller Huggins's assistant in 1927, and remained a Yankee coach until 1945. When Huggins died in 1929, Fletcher took over as interim manager, but refused all other offers to manage again.

Here are a couple more Fletcher images from around the web:

An image from 1911 at the Polo Grounds and finally Art Fletcher shares a spot on on a 1912 Hassan Triple Folder T202 Baseball Card with Christy Mathewson. The front and back of the Fletcher portion is identical except for the border.

Posted by Commishbob at 7:16 AM