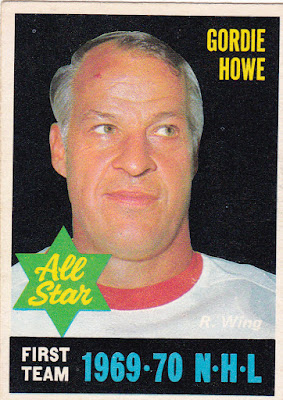 I recently went hog wild on eBay and put my eBay Bucks towards a bunch of 1967 Topps stars. They showed up today but I wanted to get this card posted before I dig into those.

This 1970/71 OPC Gordie Howe All Star is one I've seen a few times and just never got around to bidding on/buying. Then the same Net54 poster that had the Spahn card available had this for sale as well.

The look on Howe's face is pure 'Gordie Howe'. He looks like he's eyeing the guy who just scored against the Wings and is celebrating a little too much. I'd hate to be that guy. The back of this card is hardly worth scanning, let alone posting.

It's part of a puzzle (I hate 'puzzle back' subsets) and it shows just a piece of the border and some shadowing. The set had two different puzzles as part of the All Stars, Gordie and Gilbert Perreault of the Sabres. (I could be wrong on this, my memory is lax and I'm too lazy to do any digging right now.)

I did find a pic of the back of this Howe so I avoided having to crank up my cranky scanner. 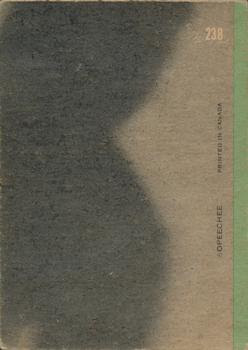 Posted by Commishbob at 1:32 PM