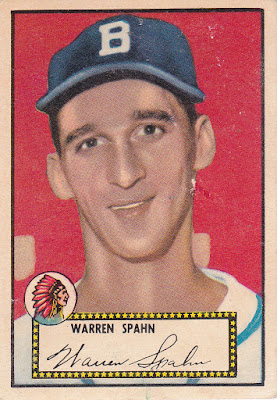 I've wanted to add a '52 Topps to my Warren Spahn pages for some time. I finally scored this one from someone over on the Net54 card forums. It's got some flaws, but don't we all? 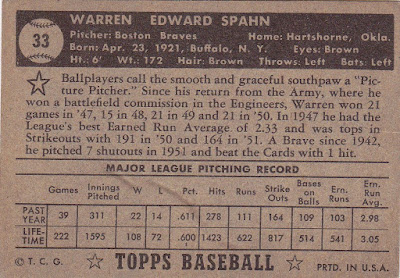 The write-up on the back called him 'smooth and graceful', and he certainly was that. I only got to see him in person at the tail end of his career but it was still a kick to watch him (pun intended).

Spahn is one of those guys who doesn't seem to have ever had a 'bad' card. OK, maybe the '65 where he's a cap less coach isn't all that attractive, but it's still a '65 of one of the greats. BTW...he won 363 games despite losing three full years while serving in WWII in the U.S. Army in Europe. He was 22 when he entered the service. It's hard to believe he wouldn't have been a 400-game winner had he pitched during those years. But he sacrificed a part of his career as did many Americans, ballplayers and otherwise.

Posted by Commishbob at 4:15 PM