Yup, it's pretty ugly, but I was happy to land a 1959 Topps Venezuelan Ace Hurlers card. It puts me just that much closer to finishing off my Billy Pierce collection want list.

These are very difficult to come by and I long ago decided I'd grab one in whatever condition I could get. Other copies that were sold recently were not in much different condition than this one. It's fairly typical of cards from the Venezuelan release of the '59 set. I don't think the fact that he shares the card with Hall of Famer Robin Roberts made this one any more difficult than it would have been otherwise. These '59s are just tough. 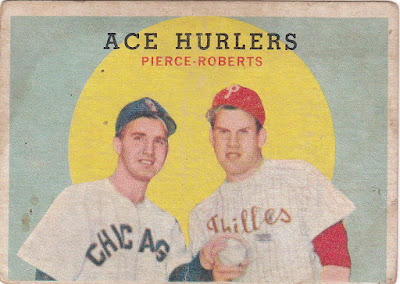 I got lucky on this one. It sort of slid in under the radar because two others were up for bids at about the same time. Those two drew off the few other people who chase this stuff and I was able to win this fairly cheaply.

Pierce had a card in two other Topps Venezuelan sets, both were base cards. Those two, the 1960 and 1964 are much more attainable. 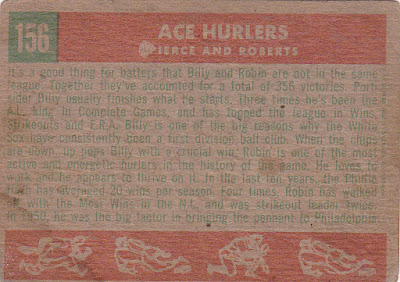 I haven't tried yet but I may attempt to clean some of the surface dirt on the front of this card. I don't believe in trimming cards, restoring corners or other restoration techniques, but I have no issue with someone (me in this case) doing some cleaning on vintage cards. I've used a clean, soft cloth to take off gum residue before.

With this one in the fold, I'm down to one card on my Billy Pierce 'target' list, the 1959 Bazooka SP. That one is a tough find and impossible at a cheap price. I haven't given up hope though.
Posted by Commishbob at 5:42 PM