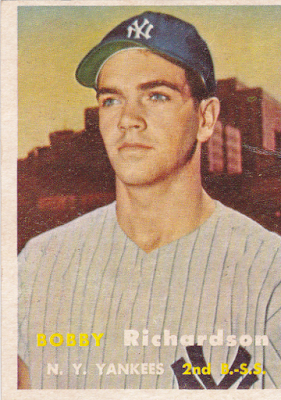 Nothing remarkable here but I wanted to post the final cards from a couple of sets I've been working on for a while. Up top is the 1957 Bobby Richardson that came last week. The right border is there despite what my scanner did to it. Richardson is a clear-eyed rookie pictured with a faintly seen Yankee Stadium scoreboard behind him and the Bronx as a backdrop.

His card wasn't the last card purchased for the build (that honor went to his infield partner and fellow rookie, Tony Kubek) but it was the last to arrive and find its slot in the binder. Both the Richardson and Kubek cards were part of the shorter-printed 4th Series, both (as noted) were rookie cards and both, being Yankees, carried the 'pinstripe tariff'.

I actually have a few items on my '57 list, a couple of unnumbered checklists and some contest cards, all of which can wait for later. I have 'examples' of each in the binder and that will do me for now.

Below is a poorly scanned '74 Dave Roberts 'Washington' card. I ended up with three of these in my mailbox within a few days of each other due to some good fortune and generous friends. I actually have a few '74s coming from COMC that will be the last to make the binder but this was the last card I found for the set. 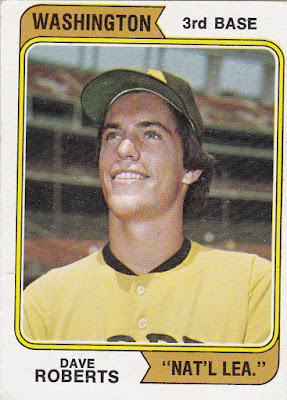 Back in early October I was bitchin' and moanin' about the problems I had putting this thing together and I'm still not crazy about it but looking at it in the binder I'm coming around to appreciating it again.

Meanwhile, my '73 build is a card or so from completion and a huge bundle of '71 Topps football cards came my way at the card show on Saturday. I'm now close to 75% done with that fun, colorful set just a few weeks after deciding to tackle it. I think the collecting gods were smiling Saturday as the lot of 71s were in amazing condition and my friend Darryl was in a holiday mood and practically gave them to me.

I'll post a few other pickups from the show and discuss my blogging plans next time.
Posted by Commishbob at 10:33 PM