I've been fighting a bug for the last few days and haven't had much energy so I dug through my scan folder for something to post. (Tell me you've never done that).

I picked these Salada coins up off eBay a few weeks ago. I really only wanted a Colts example for my Baltimore Colts collection but Ol' Milt called out to me so I added him to my cart and checked out. These were issued from 1962 through 1963. I believe both of these are '63 vintage. A 'parallel' set of the baseball coins as well as hockey versions were available in Canada under the 'Shirriff' brand name at roughly the same time (and later that decade). I have the Salada Billy Pierce but the Shirriff one has proved to be elusive. 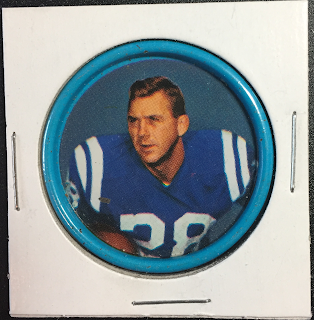 Jimmy Orr was a big deal in Baltimore during his 10 seasons there (then again every Colt was a big deal to Charm City fans). He always seemed to be catching TD passes from John Unitas in the right-hand corner of the endzone of Memorial Stadium's south end. That corner was dubbed 'Orrsville'.

And with the Super Bowl coming up tomorrow it's appropriate (though painful for me) to note an infamous moment of Colts' lore. From Wikipedia:

Orr is known for his part in a play in Super Bowl III against the New York Jets. On the last play of the first half, Colt quarterback Earl Morrall handed off to Tom Matte, who threw a lateral back to Morrall in a flea-flicker play. Orr was wide open and waving in the end zone, but Morrall did not see him (perhaps because Orr was camouflaged by a backdrop of uniformed band members outlining the end zone). Videos of the play reveal that on an otherwise overcast day, the sun mysteriously came out just before the play, and shone directly into Morrall's face, while Orr was downfield in the shadows. Morrall threw instead to fullback Jerry Hill, but the ball was intercepted by New York Jets safety Jim Hudson. 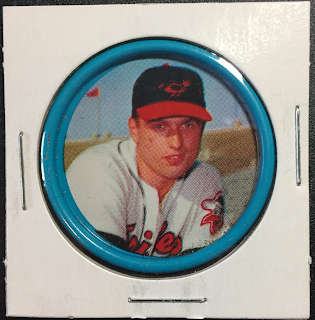 I loved Milt Pappas before he was traded to the Reds for Frank Robinson in December of 1965. I was kind of disappointed that he was gone. But I got over it. 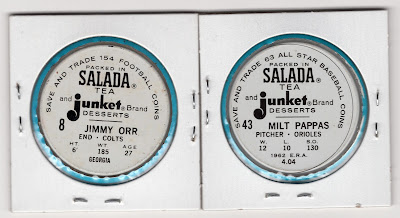 As noted on the reverse of these coins they came in packages of Salada Tea and Junket desserts. I don't recall having either product in our home growing up. I do remember hearing and seeing commercials for Junket Rennet Custard. I had no idea what that was and didn't until a few minutes ago when Google enlightened me. Apparently the same company that now owns the rights to that name also owns the rights to the Salada Tea brand. Whatever. 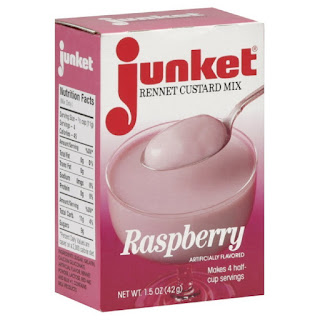