I thought that the 1958 All Star Game program I bought at the recent TriStar show was worth a closer look. I'm just going to post some highlights rather than very page. I don't want anyone nodding off while I indulge my love for old publications!

As with so many of these types of vintage items the cover is the best thing about it. I have a hunch that the player/ump illustration was based on a photo. I tried to find the original picture via Google and Getty Images with no luck. Of course it likely wasn't originally a shot of an Oriole player sliding to tracking it down was a dead end from the start. 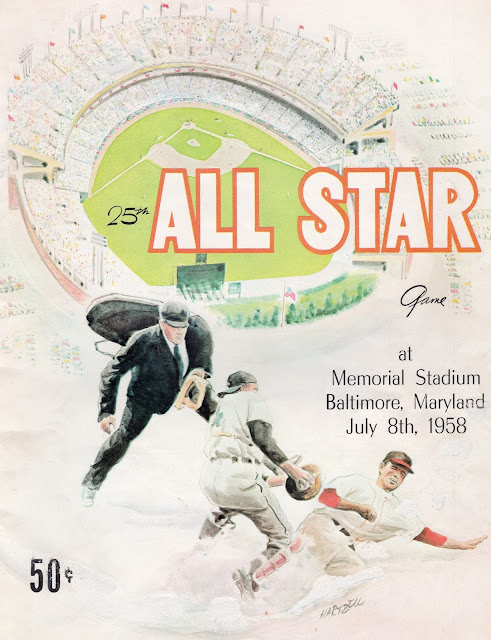 The covers shown were scanned but the inside pages are pics I took. I learned the hard way that pressing these vintage paper pieces onto a scanner platen is a mistake.

Commish Ford Frick welcomes us to the '58 ASG with an inspirational message. I hadn't realized that this was the 25th annual game. There was no ASG in 1945. '58 was the last of the 'one game' All Star breaks for awhile. From 1959 thru 1961 they played two each year. 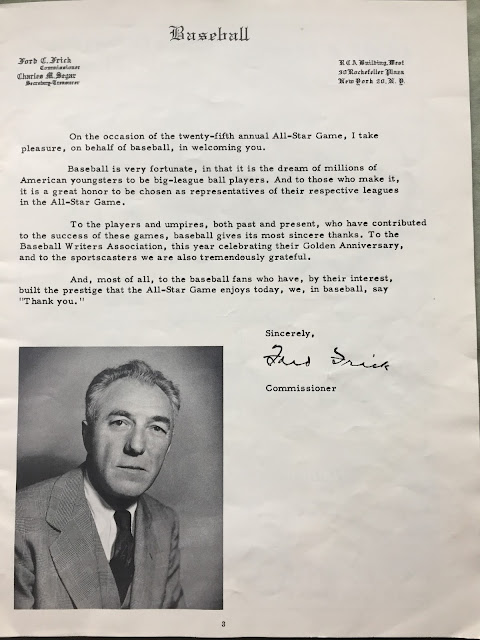 The old ads in these can be a hoot. Check out the one for Alan Ameche's place. I could go for a Powerhouse burger myself right about now. 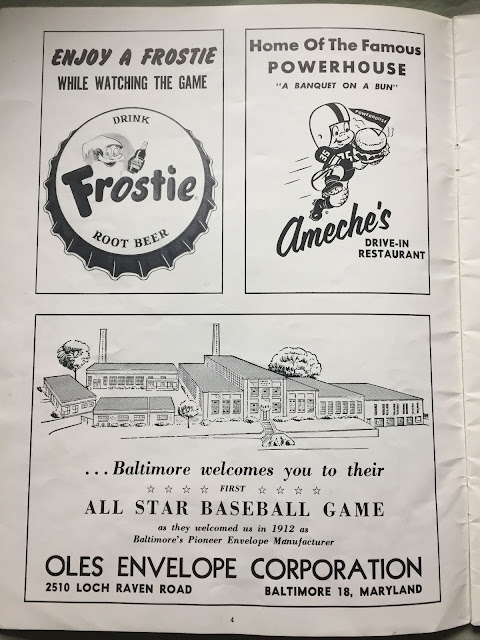 The longest feature on the book was this article on the first ASG. Cameos of the managers. They had faced off in the '57 World Series and would do so again that fall. 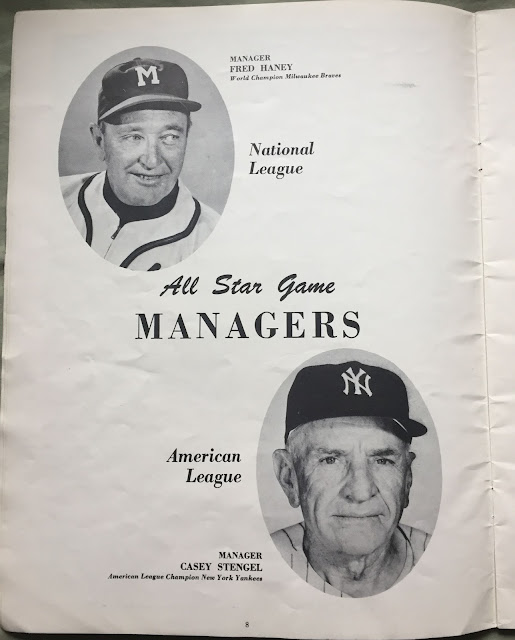 Bob Maisel was a legend in Baltimore baseball writing. His father Fritz was a player for the Yankees and Browns. 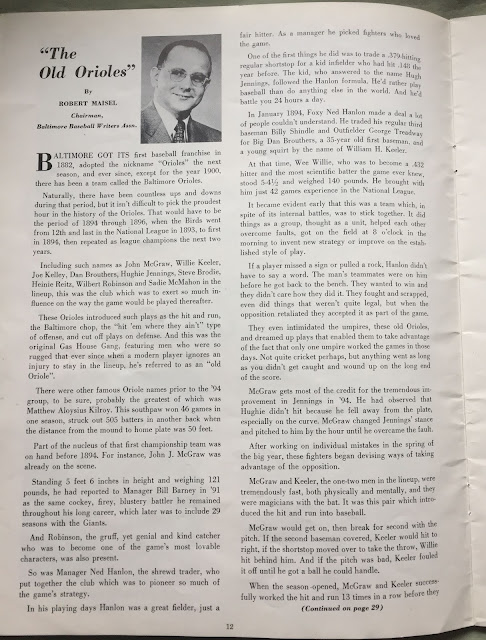 Unlike modern programs the ones back in the day were published locally and very close to the game. That meant you would find the actual elected squads pictured. The AL lineup had a local guy, Gus Triandos. 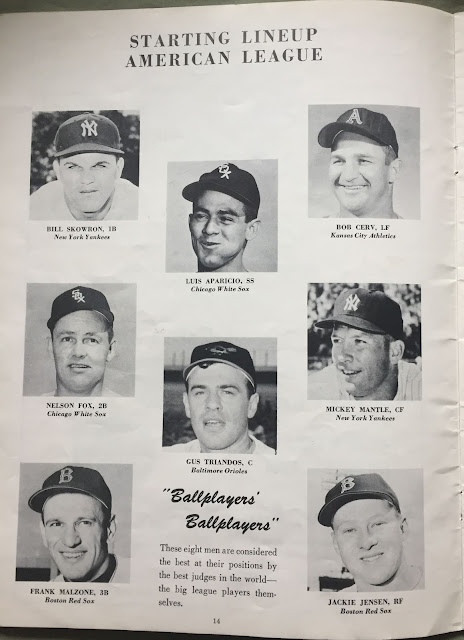 The original owner of the program kept score! It wasn't as hard to score an ASG back them. Managers didn't feel the need to sub in every player available.  It's hard to see in the pic but the scorer listed Al Kaline as entering the game for the NL(!) in the 9th. I thought it was just his/her quirky way of noting subs but you can see that Lee Walls was entered correctly. 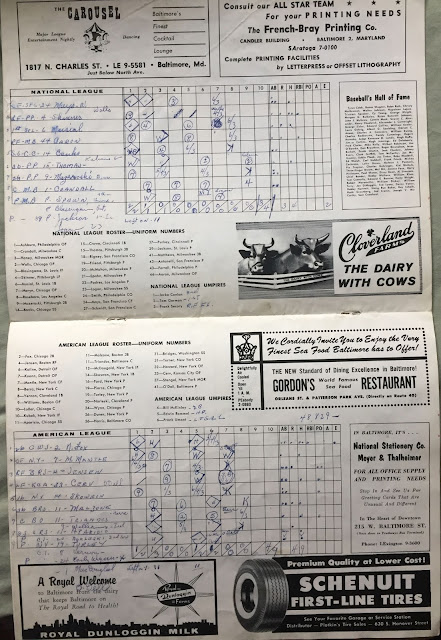 BTW...if you check the entry for this game on Baseball Reference you'll see that Haney only used three position players from his bench.

This NL starting group was pretty stout! In all there were 9 future Hall of Famers in the starting lineups. 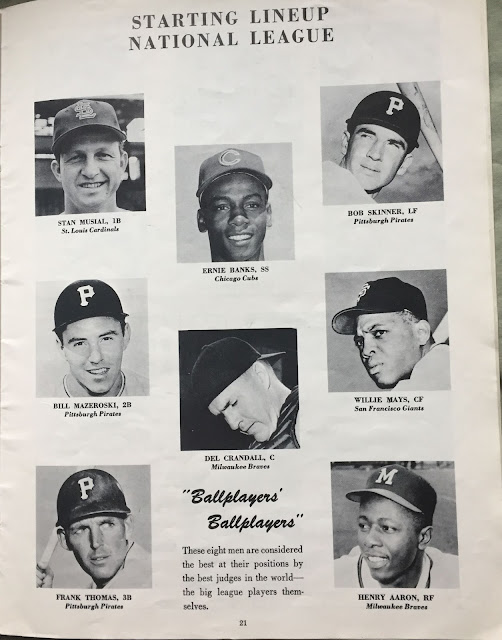 All the reserves got a photo included on a page similar to this one. Hey, I spy Billy Pierce! 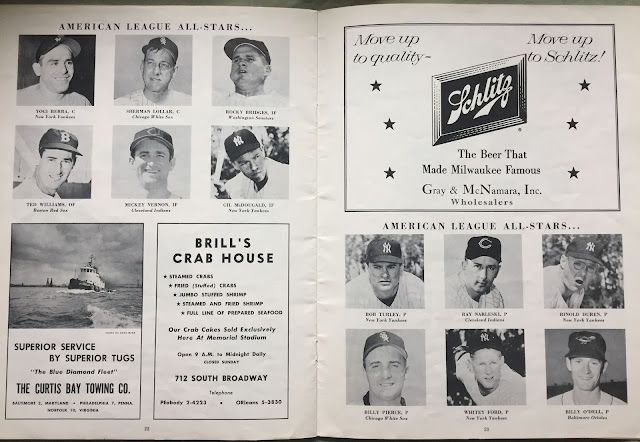 This is a nice way to fill a page. "Hall of Fame Candidates" indeed! 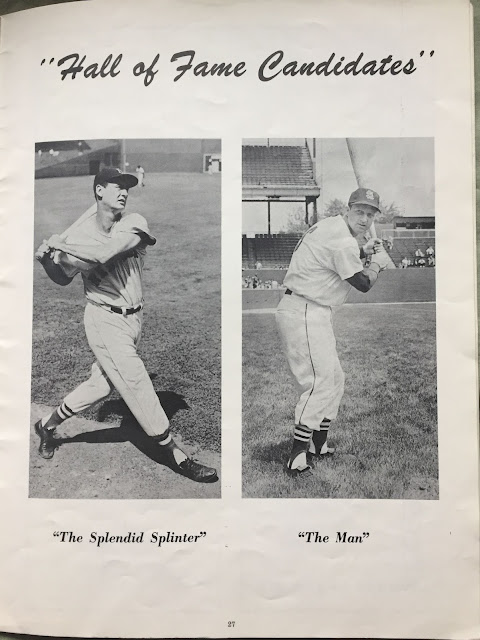 Some of the NL reserves. Spahnie got the start making him the 9th Hall guy. 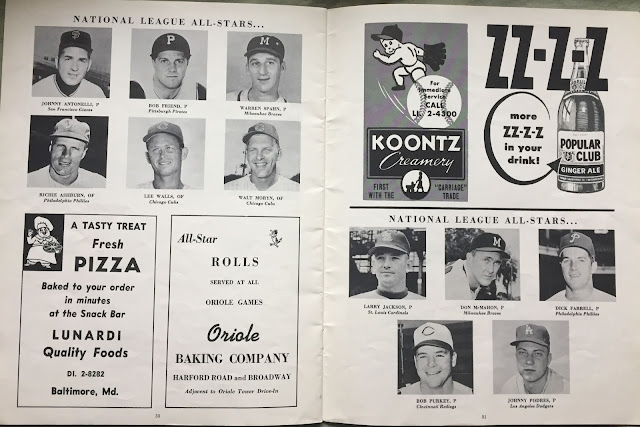 Old fashioned line scores and batteries from the previous 24 ASGs bring up the rear of the program. 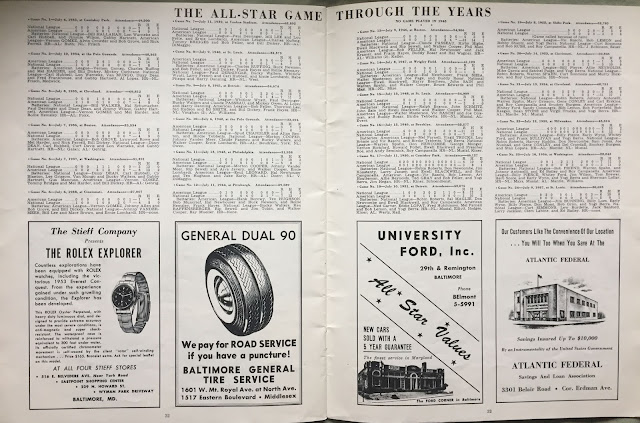 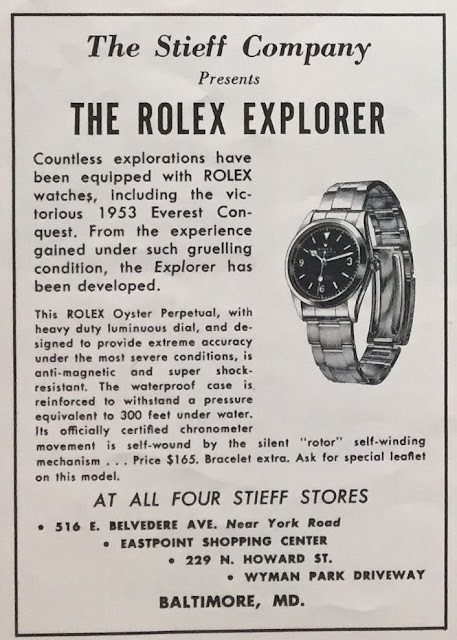 And finally the back cover presented by Gunther Beer! Now Gunther I remember. Their ad was on top of the old scoreboard at Memorial Stadium. The company is long gone but the brewery was made into a fancy apartment building. 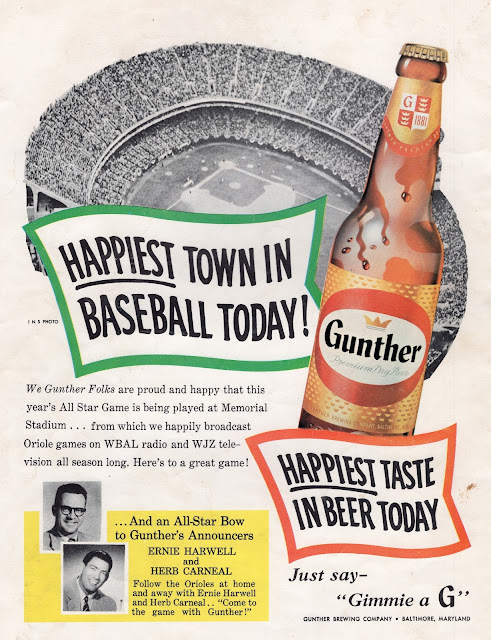 Ernie Harwell was in his fifth year as an Orioles broadcaster. He moved on to the Tigers after the 1959 season. Herb Carnel was in his second season as Harwell's partner. He stayed through the beginning of Chuck Thompson's time as lead man in the Orioles booth.

In addition to this '58 program I picked up yhe '93 issue. I may post that soon. Much bigger and fancier but it can't compare to the '58 in nostalgic charm.
Posted by Commishbob at 7:30 AM