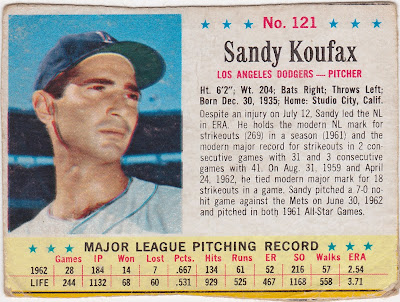 One of my hobby quirks is that some cards are better if they are not perfect. Case in point...Post Cereal cards. Back in the day my friends and I ate a lot of Alpha Bits, Rice Krinkles and whatever it was that they called their version of Frosted Flakes (Frosted Post Toasties?).

There were families with six or so boys that lived at either end the street back then (heavily Catholic town) and we all collected and traded these. And we all did terrible jobs of cutting up the boxes. After I bought this Koufax recently the seller messaged me to say that he had failed to mention a crease that ran thru the card in his description. He offered to cancel the sale if I wanted to. Cancel it? Hell, no. Send that puppy my way!

The other thing I don't do is binder these or my Jello cards. I keep them in a stack in a shoe box on the top shelf of my hobby closet. (I'd prefer a cigar box but I haven't had one of those around is ages.) I love shuffling thru them when I'm feeling old and need a shot of nostalgia. Like this week when I got my official Medicare card in the mail from the SSA.

Speaking of Medicare... when they showed Sandy at the World Series recently my first thought was "He looks like he could still give 'em and inning or two...and he might have to". He also looks remarkably like my father. Even my wife mentioned it.

Anyway, here he is at the World Series. The best lefty I've ever seen. 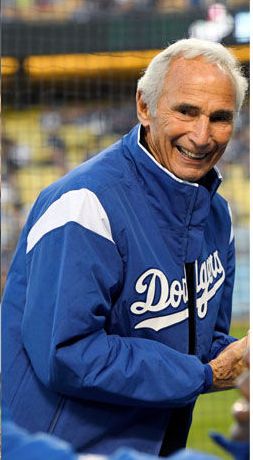 Posted by Commishbob at 4:54 PM