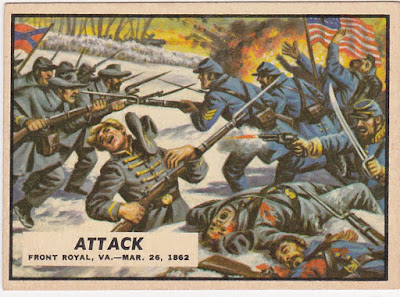 This past week I picked up three more cards from Topps' 1962 Civil War News set. These bring me within reach of completing it this year. I lack three two (wantlist is over in the sidebar) with one or two more that desperately need to be upgraded Set complete as of February 4. Now only upgrades remain to be found.

I've gone on and on about how much I enjoy this set. There is definitely a large measure of nostalgia involved with it. My friends and I loved these when they were issued. This set as well as the Mars Attacks set were as much a part of our childhood as baseball and football cards were.

I've already posted many of the others and did some research into the set's background, artwork and historical inaccuracies and the parallel set put out in England. This link will get you to the previous posts. 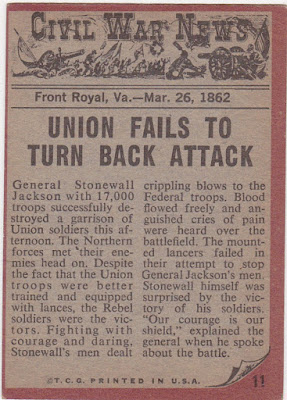 Getting down to the final 12 or 15 cards I needed changed my approach to aquiring them. I decided that I'd pay a bit more for those I needed than I had for the bulk of them. I think my average cost per card was under $3.These were five dollars each but they are in better condition than 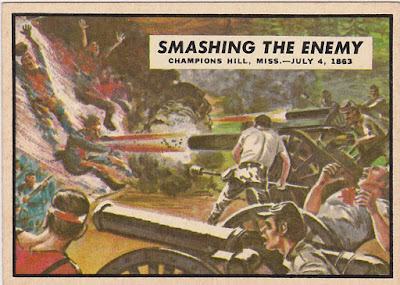 As with many of the cards these feature some pretty graphic artwork. Card #48 Smashing the Enemy (above) features Union soldiers being vaporized by Confederate cannons at close range. And as with many of the cards the details are 'close' but not exact. The actual battle was fought on May 16, 1863 not July 4th as stated twice on the card. And the hill involved was Champion Hill, not 'Champions'. This page at civilwar.org is has a lot of information. 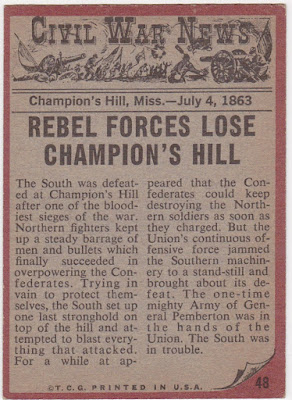 On the other hand the Topps writers got the Battle of Cedar Creek right, at least as far as the date is concerned. 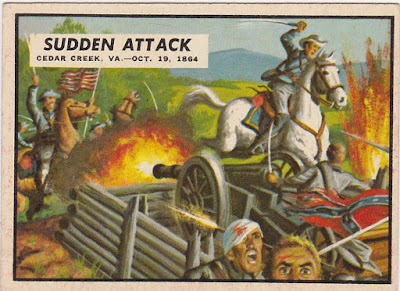 But the cardback doesn't really reflect what is written about the fight on that same civilwar.org. 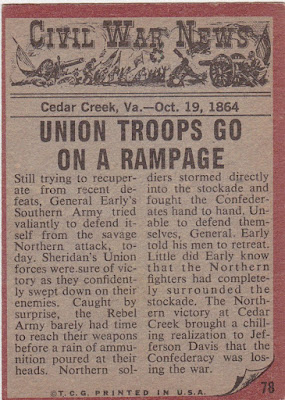 I don't really make annual formal 'goals' for my hobby endeavours but I'd love to finish this thing off sooner rather than later.
Posted by Commishbob at 12:00 PM