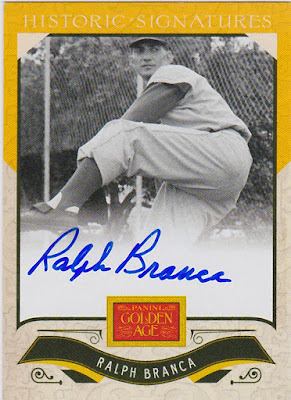 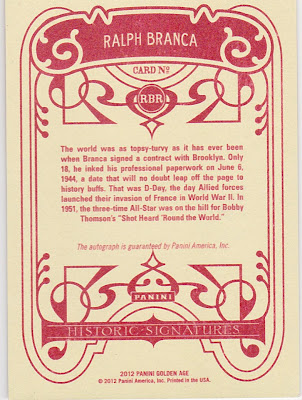 I make no bones about the fact that the Dodgers are my 'other' team. I trace it back to discovering the brilliance of Sandy Koufax in his heyday. So I was pretty happy when I opened up my box of 2012 Panini Golden Age and found that this insert was in there.

Ralph Branca might not be Sandy Koufax (who is?) but he holds a special place in Dodger lore, of course. He is best known for giving up Bobby Thomson's 'Shot Heard 'Round the World' but he won 88 big league games and had four double digit win seasons for the Bums. He won 21 games in 1947 and he made the NL All Star squad in 1947, '48 and '49. And he seems to be an interesting and personable guy in his own right. I mean he became fast friends with Thomson and they made many appearances together in the years after that fateful game on Coogan's Bluff.

His website is pretty interesting. I'm going to track down a copy of his book as I have read a couple others in which he plays a prominent role.

The Panini set itself didn't knock me over but I do enjoy the trip down Memory Lane it brings. I got a couple of other neat inserts I'll show in the coming days.
Posted by Commishbob at 6:30 AM