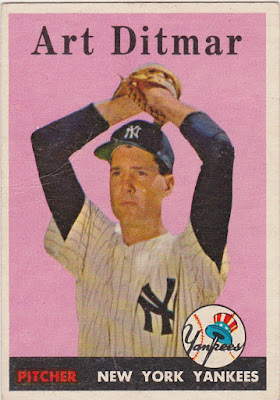 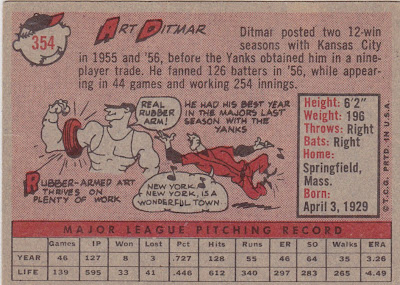 Yes, Art Ditmar. For no other reason than I think I have more vintage cards of him than any non-Oriole other than Sandy Koufax. I wrote about my being a fan of the guy when his card was featured on my 1959 Topps blog. I explained it like this:

True confession time... I've always had a 'thing' for Art Ditmar. No, no... not in the same way I've always had a 'thing' for Jennifer Beals..... but a 'thing' nonetheless. I've got several of his cards. It began when I was a kid and the joke among my many Yankee fan friends was "Oh oh, you're screwed, here comes Art F'ing Ditmar!!"  Yes, most of my friends had precious little comedy talent. but that's another post. It was one of those inside jokes and we all became fans of the guy, even those of us who didn't root for the Yanks.

The '58 Topps set doesn't get a lot of love generally. At least it seems that way to me. It's pretty colorful but I think the 'no-background' pics, many of which are just head shots, leave something to be desired. No matter this pink Ditmar card is pretty sweet. The backs had a lot of 'stuff' crammed into the small space. Here Ditmar's card contains a short write-up, his vitals and a 'double' cartoon with some fun artwork. The standard (thru '58) year/life stat lines cover the bottom.

I'll be putting up more Art Ditmar cards throughout the upcoming week. Try and curb your enthusiasm, will you? I'm sure I'm putting my 'Oriole Fan Membership Card' at risk but that's OK. I'm secure in my Oriole-ness.
Posted by Commishbob at 4:05 PM