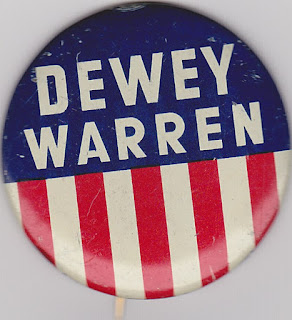 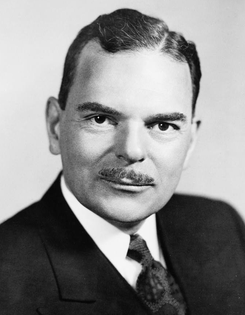 That's one of the most famous headlines of the 20th Century. In the 1948 Presidential election the Chicago Tribune prematurely published a special edition of their paper declaring Republican Thomas Dewey of New York the winner over Missouri Democrat Harry S Truman who had run as FDR's Veep and succeeded him after his death. Of course the Trib was wrong and Truman got a lot of mileage out of the picture of him holding the paper and smiling.

1948 marked Dewey's second run at the Presidency  He had fallen short in 1944 against Roosevelt although his 44% of the popular vote was higher than any other man to run against FDR. In 1948 he was the prohibitive favorite against a splintered Democratic Party but his timid, middle of the road campaign left him vulnerable to an upset and Truman won the election. 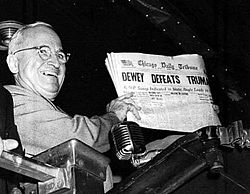 Dewey was one of those interesting New York bred moderate Republicans of a breed that seemed to die out with Nelson Rockefeller. He served several terms as governor after making a name for himself as an anti-Mafia 'gangbuster' while serving as a federal prosecutor and Manhattan District Attorney. He became a multi-millionaire as a very successful lawyer.

Late in life he became discouraged by the direction of his party and essentially left it when he refused to attend the coronation of Barry Goldwater as the GOP's 1964 candidate.

The pin at the top is from his 1948 campaign that he ran alongside his VP candidate Earl Warren then Governor of California. The one below comes from either that campaign or the previous one in 1944. The slogan "Clean House with Dewey" is likely a play on his reputation as a crime fighting prosecutor.

The one up top and the one on with the flaws below are from my collection. It looks a lot rougher in my blown up scan than it does in person. I found a nicer example of that one on the web and posted it for clarity. 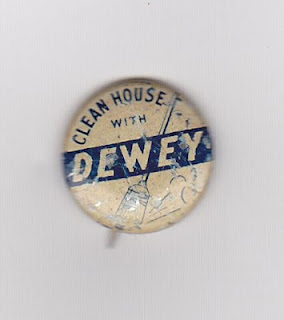 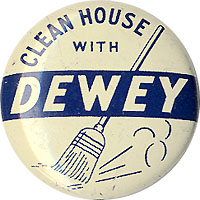