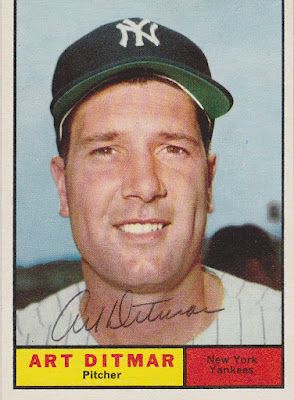 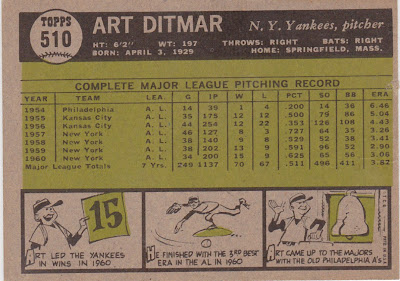 Here is Part 2 of this blog's look at 50s/60s pitcher Art Ditmar. The 1961 Topps set is fairly plain, not ugly, just plain. The green and black backs though is one of my least favorite Topps cardback color combos.

The left panel of the cartoon on this Ditmar card gave me pause. I had to go check the numbers and sure enough Ditmar's 15 wins led the Yankee staff in 1960. I would have bet on Whitey Ford, or even Ralph Terry.

Ditmar was treated pretty rudely by the Pirates in the 1960 Series. He started twice, getting KO'd in the first inning of Game One and the second inning of Game Five. Yikes.