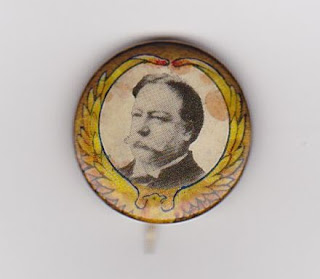 I picked this one up for $12 last month. It was just different enough to catch my eye and the price for a century old pin was right. The stain doesn't detract much from the unique gold eagle design. I've seen this pin elsewhere being described as being issued for the 1912 campaign but I have no way to be sure. It just might be an inauguration souvenir.

William Howard Taft was president from 1909 through 1913. He was trounced in his re-election bid. He received just 8 electoral votes in what was the worst defeat of a seated president in history. That 1912 election was contested by Woodrow Wilson, Teddy Roosevelt (who Taft had served under a a cabinet member) and Taft. Wilson won with just 41% of the popular vote.

Taft was the first President to throw out the baseball season's traditional first pitch. He served a Chief Justice of the Supreme Court after his days in the White House.
Posted by Commishbob at 7:00 AM