And yet another two 1958 All Star cards 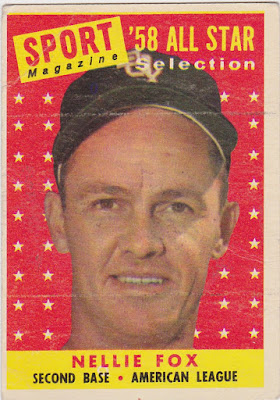 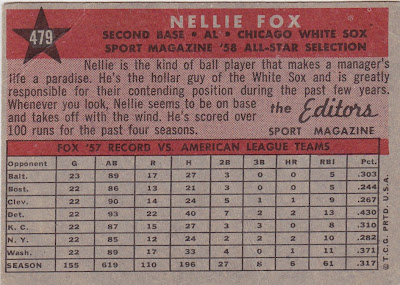 This Nellie Fox has a creased corner which doesn't show up on the front in this scan to the same extent it does when viewed in person. OTOH the horizontal lines that cross the front in the scan are barely perceptible in person. I need to figure out my scanner's properties I think.

Anyway the back of the card, as on the rest of these terrific '58 All Stars, tells us that Nellie terrorized the Tigers in 1957. He went 40 for 93, a .430 clip. In addition he scored 22 runs, had 7 doubles, two homers and drove in 13 runs. Those are the best numbers he had against any one club. Of the 21 times he collected three or more hits in a game that year, eight of them came against the Tigers. He did it four times between August 9th and 17th against them. Then on August 18th he hit one of his five 1957 homers. I bet they got sick of him. 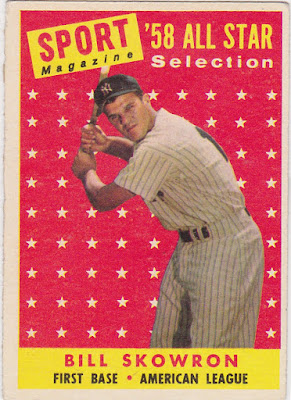 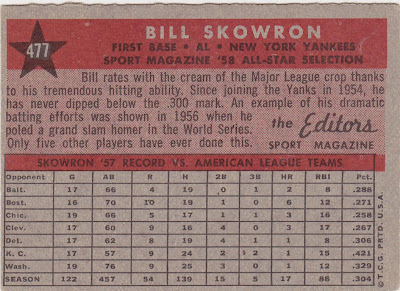 I like the Skowron card a lot because it's not a portrait. And because Moose has his trademark 'squint' on. And because he looks like John C. Riley. And because I just liked the Moose in general. Ignore the ragged left edge and soft corners, it's got a nice shine to it. Looks like my Orioles kept Moose in check fairly well in 1957. The three extra base hits they allowed him are the fewest of any club that year.

So this wraps up my '58 AS card eBay haul of last month. I'm pretty sure I'm going to try and collect the rest of this subset. May not be anytime real soon but I'll get to it.
Posted by Commishbob at 1:19 AM