One of the things (OK, the BIG thing) about getting old is a tendency to forget stuff. Like where you see things that first caught your eye. In this case I can't remember whose blog had a post about these 1966 Amoco Oil All Pro game stamps. Wherever it was I knew immediately that I needed at least one of the Colts in the set.  Old, oddball Baltimore Colts items are at the top of my list of coveted collectibles.

Poking around online I wasn't able to find much info on these but looking at the eBay auctions it wasn't hard to piece together the idea behind them. You fueled up at a Standard Oil station, received a sheet of three stamps and pasted them onto the game card.

I was able to nab a three stamp game piece that included the great Lenny Moore. As you can see by the fact that the print on the reverse is plainly visible in the scan these things are very thin. 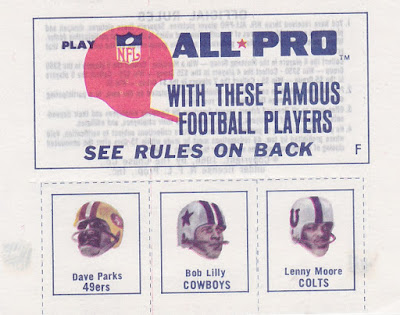 Rules/instructions on the back with the front side showing through. Opening the package I found that the piece was in a wax paper envelope that appears to be about the same vintage as the stamp. I'm guessing that's how you received it at the gas station. 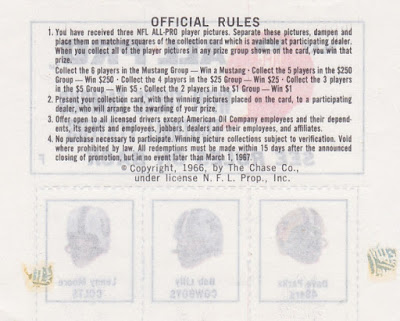 On eBay currently there is one 'collector's card' up for grabs. I snagged the photo from the listing to show here. Top prize was a 1967 Mustang! Damn, I'd love to have one of those right now. 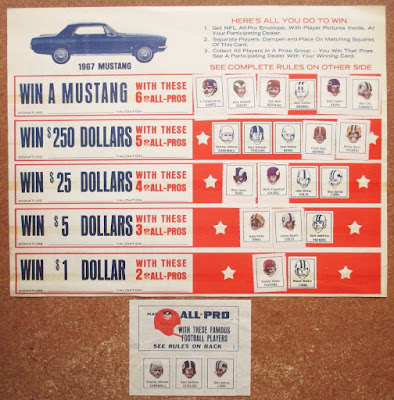 Just like all these types of collect-a-piece promos (McDonalds' Monopoly game comes to mind)  it appears that finding all but one of the top level prize pieces was easy. Getting the last one? Not so easy.

The stamps themselves? They are so poorly executed and incredibly cheesy that they have quite a bit of charm. Just look at these things! I can't tell if they are photos or drawings. I think they are some goofy combination of both. My Lenny Moore may be the best (least awful) of the lot.

I blew up a couple of others from the collectors card photo.

Pete Retzlaff  (a terrific receiver in his day, btw) resembles the Great Gazoo, no? 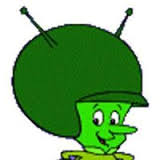 But my very favorite is Redskins LB Sam Huff. WTH? He looks like Daniel Craig in a fez. Sam Huff was one of my father's favorite players when he was with the Giants. I bet my old man wouldn't have picked this shot as a Sam Huff photo.

Anyway it's a neat little item that now has a place in my huge Baltimore Colts binder.
Posted by Commishbob at 3:11 PM