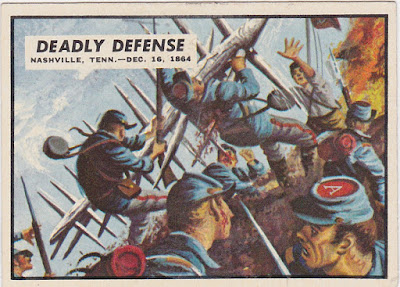 I'm slowly adding to my '62 Topps Civil War News set. I've found that there is no middle ground with these either price or condition-wise. I've exhausted the supply of needed and affordable (under $2) examples on COMC. Now I'm doing a daily check on eBay. It's hard to find anything under $5 there.

These two come from an earlier eBay purchase and are in better shape than most of my other ones. That one up top is one of the nightmare-inducing examples that stuck in my memory from my elementary school days. A painting of soldiers impaled on abatis stakes tends to stay with a kid.

Here is the back. I bet I was disappointed that there wan't a description of the gruesome scene depicted on the front. Instead it discusses the reaction of CSA General John Bell Hood to the lost battle of Nashville in December of 1965. But. as has been documented, that story was made up by the Topps writers who did the 'News' on these cards. More on that in a bit. 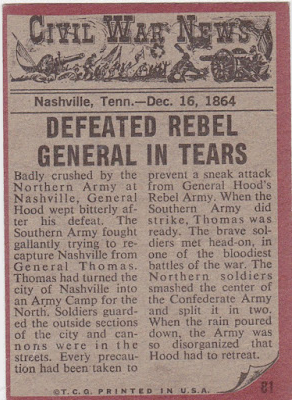 #52 Friendly Enemies depicts wounded from both sides sharing a canteen after presumably fighting each other moments before. 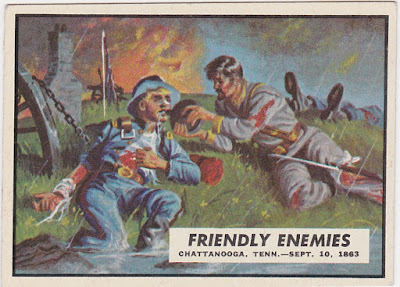 The card's back references the post battle atmosphere of Chattanooga in September of 1863. 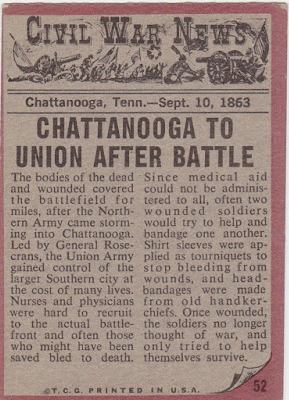 I was able to find a couple of nice examples of the faux Confederate currency that was inserted into the packs. They in 10 different denominations. Some serial number variations bring the total to 17 different. Once I'm done with collecting the cards I may try to nab a few more of these bills. This $100 note is the better of the two I have.

The title of the blog mentions a 'subtraction'. Here's why: 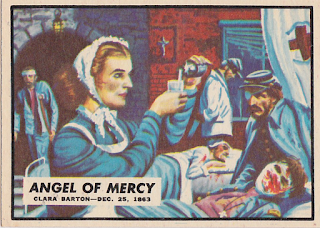 In my haste to scoop up all the cheap ones available on COMC I added this #58 Angel Of  Mercy to my cart. When the package arrived it stuck out from the rest of my purchased lot. The obvious difference was the size of the card. It was smaller than the rest and flipping it over the the pink/red is brighter as is the cardboard itself. 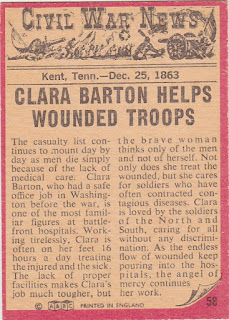 I had no idea that these cards had been reprinted by Topps' 'kissing cousin' AB&C in England in 1965. I think of them as a football (soccer) card maker but they did loads of non-sports issues as well. Scroll down on this webpage for a list of AB&C card issues.

I'd obviously misread (or not read) the card description and ended up with the British version of this creepy Clara Barton card. It isn't the first time I've 'mis-bought' something online. Won't be the last either. And it IS pretty creepy. Her bloddy and bandaged patient looks like something from those Friday The 13th films. Here are comparison views of the AB&C card and one of my Topps cards. 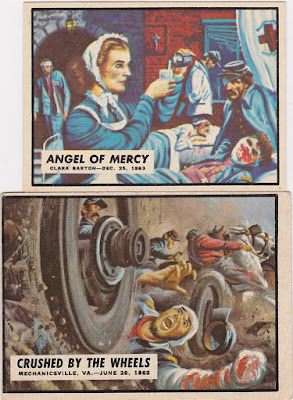 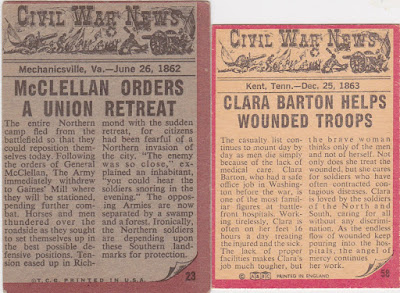 Reading the card backs and poking around the internet doing just the barest of research turned up the fact that the card backs are far from an accurate chronicle of the Civil War. I recently came across a 1998 interview done with Len Brown who was one of the Topps employees involved with making this set. It's very long and the page uses very small type but it's still worth looking at if you are interested in this set. It's a good read even if you just want some insight into how these old non-sports sets were done.

Late in the interview Brown is asked about the backs and how they were developed and here is that exchange:

{Paul} ....... By the way, who did the stories on the backs of the cards?
{Len} Uh-oh, I was afraid you were going to ask that. I slaved over the backs.... but what I am not proud of was that I misled lots of children to think that these were true events that took place during the war. Most of them were just fictional. We planned the pictures.... composed the scenes out of our imaginations..... after the paintings were done, I wrote a little story about the front of the cards---then I would look up a town or date that seemed appropriate and would try to publish a newspaper back as if it were a real event. I remember getting a letter from a schoolteacher years ago, thanking us for helping the children in her class to learn about the Civil War. Yet, sad to say, facts never got in the way of telling an interesting story.
{Paul} That's okay, Len. The stories were great. I enjoyed reading each of them -- true or not. Were there any stories that were factual? I remember a particular card; "The Silent Drum" was about a drummer boy who was killed. Or were they all made up?
{Len} There might have been a few accurate stories that were written up. I suspect "The Silent Drum" was fictional. We were just trying to tell an interesting story about the picture on the front. If I had to guess, I would say 80 to 85% of the stories were complete fiction pieces. The battles were based on fact, but the incidental details were really fiction.
{Paul} Well, the stories were good, factual or not.

The origin of the Confederate currency inserts is also discussed:

{Paul} So is it an authentic copy, or just an artists conception of what the money looked like?
{Len} I don't believe they were 100% authentic. We purchased some antique confederate bills and reworked the designs a little bit. It was a combination of several elements. I think they came off looking pretty real because we stayed close to the original. In those days we were afraid of just "counterfeiting" the Confederate money, even though they were no longer considered real currency.


I'm lacking about 30 to complete the Civil War News set.  expect it to take me quite awhile to finish it off but having a project always makes this hobby fun.
Posted by Commishbob at 12:28 PM