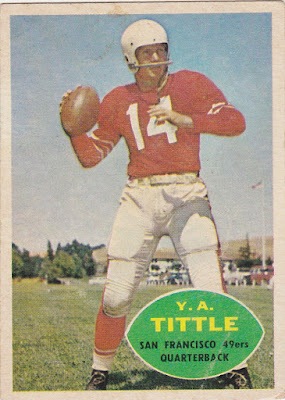 Well, football season is encroaching of baseball's summer spotlight and I know that bugs a lot of you. I'm OK with it though. I don't pay a lot of attention to the preseason football other than to gripe about having two meaningless games included with my Texans tickets...and paying the full regular season price for them.

But soon it'll be September and the baseball pennant races will be cranked up to 11, the NHL camps will be open and exhibitions underway and I'll be knee deep in the Texans season to say nothing of my Houston Cougars. It's my favorite time of the year.

In my more nostalgic moments I think about long ago Saturdays in the fall when I'd be supervising intramural football games. Then we'd all head for the Athletics office to watch pennant race baseball on TV when the shadows seemed always to be covering the mound in the late afternoon. Finally it was off to work the UH game versus Arkansas or Texas in the Astrodome. Wish I could be that carefree now.


These are some of the vintage football cards I snapped up at the last monthly card show I attended. They came out of the dollar bin but with my 'regular customer' discount I paid less than that per card. Back up at the top is a 1960 Topps Y.A. Tittle. I remember him as the quarterback of the Giants back when I'd listen to their games with my father. 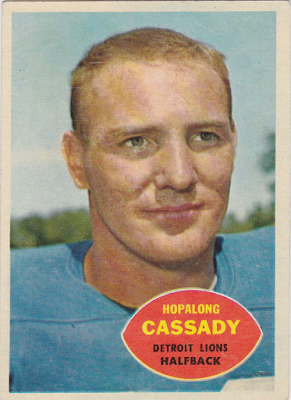 Then there is Howard 'Hopalong' Cassady on his card from the same set. Cassady won the Heisman at Ohio State and played eight years in the NFL. Although he never had the impact in the pros that he did in college he was able to help the Lions win the league title in 1957. He had about a half dozen cards during his pro career but this is the only one that uses his nickname on the front.  BTW...the original Hopalong Cassidy was a fictional cowboy romanticized in pulp novels, movie shorts and on TV. 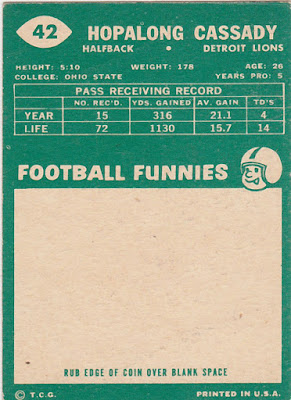 The last card is a Philly Gum Giants team card from the 1967 set. The '67 Giants added QB Fran Tarkington and in the process were able to rebound from a 12 loss season to a couple years of .500 football. And they were pretty entertaining with Scramblin' Fran at the helm. 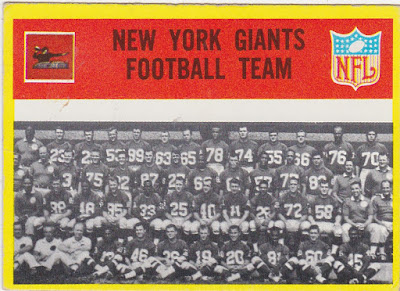 For all the greatness of the Philly Gum sets of the mid-60s you can tell by reading the blurb on the back that they would have benefited by employing a better proofreader. 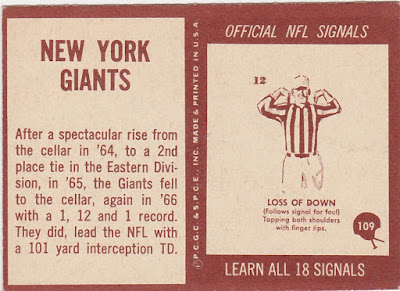 I have other stuff from the bargain bins at the show to post, including a few cards from a TV show I loved as a kid but haven't thought about in years.
Posted by Commishbob at 11:22 AM