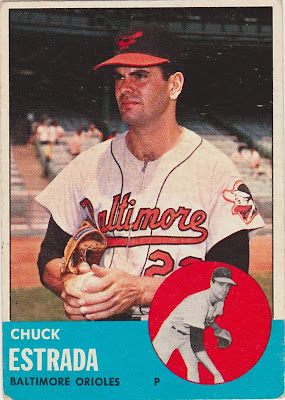 I'm not sure what possessed me to take on the responsibility of contributing to another blog. Hell, I can barely keep up with my two solo blogs. Add in my fantasy football commish and writing duties and I'm behind almost all the time. But I couldn't resist Jim from Downingtown's invite to add some posts to his 1963 Topps blog, so I bit.

Jim has also added Collective Troll as part of the blog so it should be fun. I'm definately third string on this team but I'll do what I can when called on. My supply of '63s is pretty limited. I've got the Orioles in the set of course, and a few star cards that are buried somewhere in my hobby closet. But I've picked up a few small, really cheap lots on eBay so I have some cards to keep things moving for awhile. If you are looking for NM examples you are going to be disappointed. My cheap lots were cheap for a reason.

The 1963 set is colorful and it is one I clearly recall collecting as a kid. I was a fifth grader at St. Mary's School in Nutley, NJ when the packs first hit the candy counter of Lee's Confectionary that spring. I'd use my milk money to pick up a pack as we waited for the city bus that took us to school and I'd open the pack on the way. I'm guessing that half the time I'd either lose the cards 'flipping' at recess or have them taken away by Sister Theresa during class.

The Chuck Estrada card up top is a nice one. The pose that has him rubbing up the baseball is just a little different than most pitchers cards. I love the Orioles unis from that era. That cartoon bird on the sleeve just rocks.

I have a few '63 cards posts up already. I hope you'll take a peek over there from time to time and let us know how we are doing. Thanks.

Meanwhile, here are a few of the more colorful cards from the little stack on my desk. 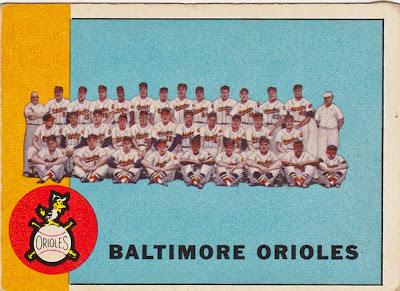 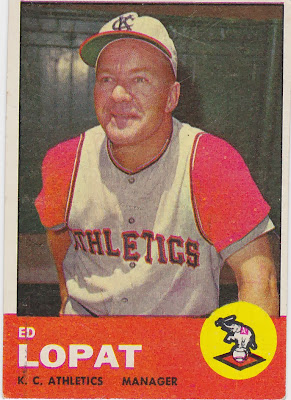 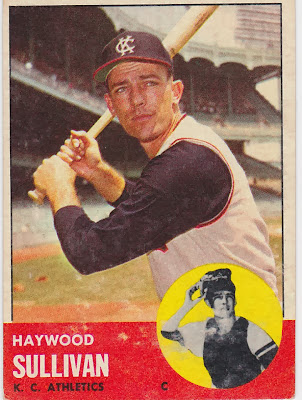