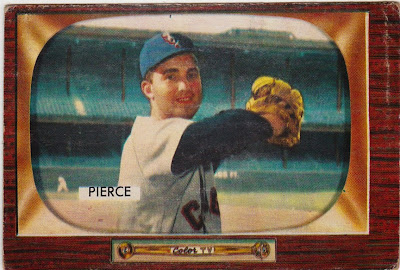 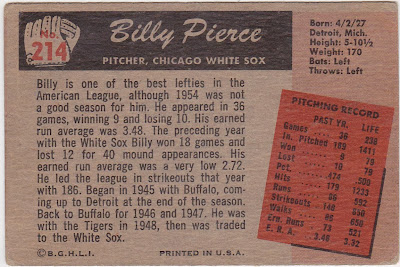 Here is the latest addition to my Billy Pierce collection. The '55 Bowman of course is pretty unique with the TV set motif. It's one of those sets I feel like I'm supposed to love because it is so different and I do to a certain extent. But to tell the truth while I like it well enough now but I was more into it as a kid even though I wasn't collecting in 1955 (I'm not quite that old). I really don't feel the need to collect many cards from it. Maybe that's why I took so long to add this one.

It came cheap from either eBay or COMC, I can't remember which. It's a bit off center (ok, maybe more than a bit) and has some scuffing but overall it's still worthy of a spot in my binder. As the card notes Pierce was coming off a less than stellar year, at least by what would become his standards. His numbers dipped in '54 almost across the board.

But in 1955 he was back on track winning 15 games and leading the league or tying for the lead in ERA, strikeouts, strikeout/walk ratio and WHIP. He started the All Star Game for the AL that year in Milwaukee's County Stadium. He went the max three innings and fanned three. Red Schoendienst led off the game with a single and was tossed out trying to advance. Pierce faced the minimum allowed by retiring eight straight NL hitters. He left with a 4-0 lead but the AL couldn't hold it and the NL won 6-5 on Stan Musial's walkoff dinger leading off the bottom of the 12th.

Billy smiles for the camera in an empty Yankee Stadium. One reason I collect Billy Pierce is that he seems like such a pleasant guy. But I bet he was a bad ass on the mound.
Posted by Commishbob at 5:45 PM