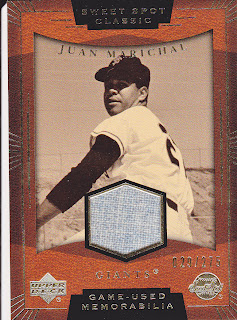 There's a TriStar card show coming to Houston next weekend. I still call them 'card' shows but I guess the proper term is 'memorabilia' shows. They are big and dominated by dealers selling other things than just cards. By the size of the lines and what the promotional flyers that I get tell me, autographs are the big draw.

I'm not complaining. I collect all kinds of sports 'stuff' and there are still enough card dealers to satisfy my wants in that area as well. Other than when I looking for '59s I never have a 'game plan' for the shows. I buy on impulse.

At the last show I attended there was a dealer who had a big box of game used cards that he was selling for a few dollars each. I think the highest price he had one any was $5. I'm still new enough in my return to modern card collecting that the 'shine' of these things hasn't worn off.

I bought a handful of these and paid maybe ten or twelve dollars. I was really impressed that I could have a piece of a Juan Marichal uni. I loved watching him pitch when he was in his glory days. Saw him a bunch, too. My best friend was a Giant fan, as was his father. We'd hit up the Giants are Shea frequently. Marichal wasn't my favorite Giant, Jim Ray Hart held that distinction, but he sure was fun to watch.
Posted by Commishbob at 8:40 AM