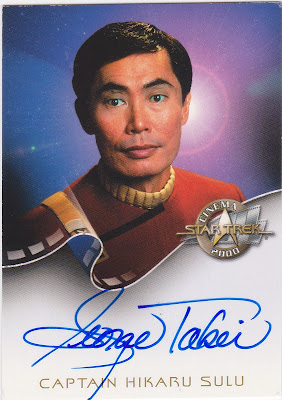 I'm a Star Trek guy. Not to a 'fanboy' extent but I enjoyed the original Gene Roddenberry show as a kid, as short-lived as it was.  And I've seen most of the movies through the years since.

George Takei, as Sulu was a great, if somewhat understated, character. In the years since he's led an interesting life, speaking out on current events and politics. He makes for an interesting Twitter 'follow' to be sure.

I don't normally pay for signed cards but I saw someone's copy of this on Twitter and thought it would make a nice addition to my collection. I found one on eBay that was significantly cheaper than the others and took a chance on it. Sometimes a cheap price comes with a 'cost'. But in this case, the card was as advertised and showed up in my mailbox packed well and in short order. 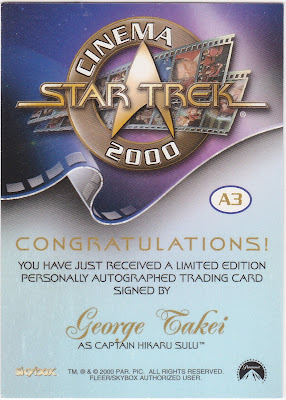 I'm not going to make a habit of buying celebrity autographs but I'm happy to have one of 'Sulu".
Posted by Commishbob at 11:27 AM