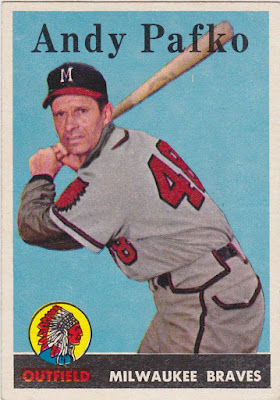 I've been itching for a new baseball project since I finished off the 1960 set. The 1958 had been in the back of my mind for a long time. And I do mean a looong time. I don't think I've ever been to a card show without at least digging thru a box that contained these colorful gems. The first things I bought on eBay were small lots of '58 Topps back in 1996.

This set has some sentimental value to me. I've mentioned before that these were the first cards I remember seeing. I was living out on Long Island and a girl in my neighborhood had some. I don't think I ever got my hands on any but by 1959 I was a collector, or at least an owner, of Topps cards. 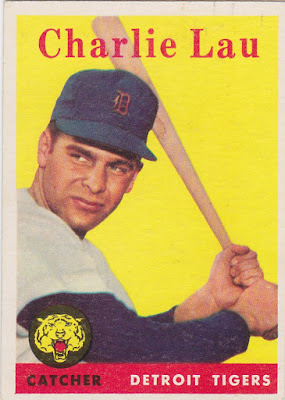 I'm still not fully committed to chasing this set. I have the All-Star subset, the Orioles, a few dozen commons and some stars so I wouldn't starting from scratch. But a vintage set is a big commitment in time, patience and most of all, cash. I'll wait and see how I feel over the next month of so and I'm going to check into the availability of inexpensive star cards at the next hotel show I hit up. 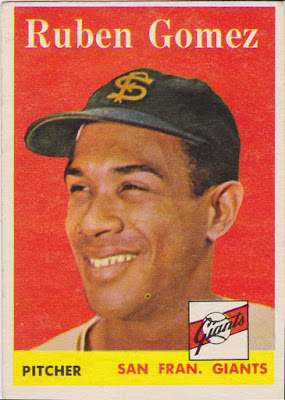 Meanwhile I nabbed a few (sort of a sampler pack) out of a vintage bargain bin at the last hotel show. With my 'frequent buyer' discount they cost me about sixty cents each. The Andy Pafko and Charlie Lau cards were two of the better conditioned ones I found. I also grabbed a couple of Giants because I always am attracted by the lousy art skills of the Topps Art Department. Ruben Gomez got a logo penned in the form of the old San Francisco Seals cap logo. Topps usually went the route of copying defunct minor league logos for teams that had moved. The Orioles in the 1954 set had caps (and unis) drawn in that mimicked the old International League Orioles gear.

Check out Bob Speake's cap. Looks like it took all of thirty seconds work to make that NY Giants' cap into a San Francisco one. 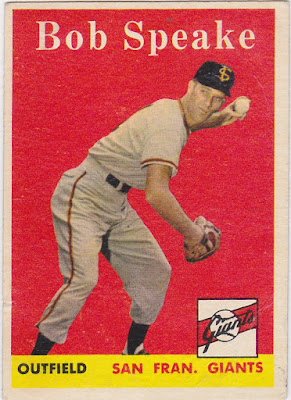 Here is a close-up.

Del Crandall, Smoky Burgess, Charlie Maxwell and Billy Hoeft are all welcome additions to my vintage collection even if I don't collect the set. 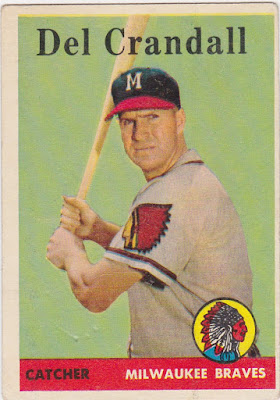 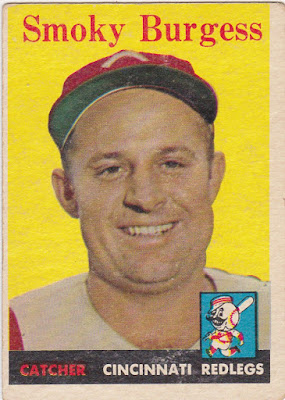 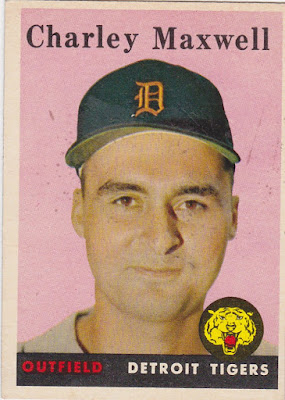 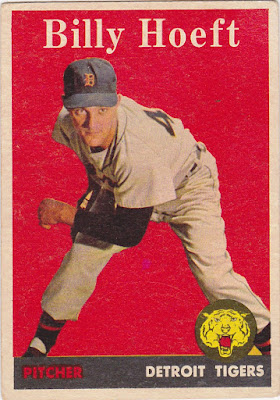 I'd always assumed that Harry Simpson got his 'Suitcase Simpson' nickname by being traded around so much. Not so. i discovered my error when reading about him for my 1959 blog. I'll let Wikipedia tell it:

That his nickname of "Suitcase" came from his being frequently traded during his playing career is a common misconception. According to the 1951 Cleveland Indians Sketch Book, he was called "Suitcase" by sportswriters after the Toonerville Trolley character, Suitcase Simpson, because of his size 13 shoe with feet as large as suitcases. This is years before his many trades. His real nickname was "Goody", which came from his willingness to run errands and help neighbors in his hometown of Dalton, Georgia. 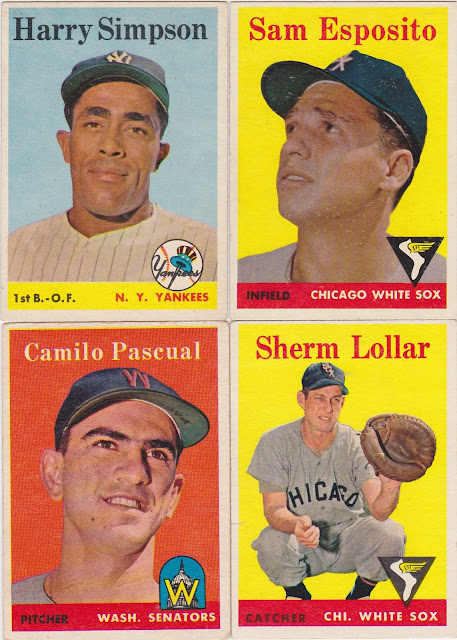 I picked up the Esposito and Lollar cards because I'm partial to the wonderful 'Flying Sock' logo. And Camilio Pascual has became a favorite of mine when I witnessed him being wrapped in a Cuban flag by on-the-field interlopers at Yankee Stadium in 1963.

Over the next few months I'll make up my mind about taking this thing on. One thing I am sure of is that collecting the '58 set won't translate into a '58 Topps blog. It's hard enough for me to find time to post to this one. And my poor ol' 1960 set blog is way behind.

Email ThisBlogThis!Share to TwitterShare to FacebookShare to Pinterest
Labels: 1958 Topps