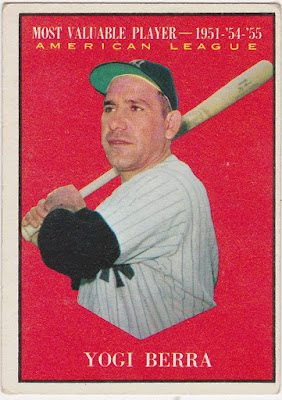 I've been off the grid for a week or so. Attending to real world things can be hard.

But while that was going on some 'stuff' came in the mail and I'll try to post it over the next week or so. First up, the last two cards from Topps' 1961 MVP subset. Yogi Berra's card was one of the more costly of the bunch and I bid on more than a few before I picked this one up. I like how the photo is cropped so that his jersey sort of resembles the point of home plate at the bottom. I'm sure that was unintentional but it's sort of cool nonetheless.

Yogi's recent passing brought him into the news quite a bit and a lot of the stories centered around his personality and his always quotable tongue. But he won THREE MVP awards in the '50s. Here is a portion of Yogi's page on the Hall of Fame's website:

In addition to his colorful persona, what made Yogi so great was that he was one of the most feared hitters the game had ever seen. Teammate Hector Lopez said “Yogi had the fastest bat I ever saw. He could hit a ball late, that was already past him, and take it out of the park. The pitchers were afraid of him because he'd hit anything, so they didn't know what to throw. Yogi had them psyched out and he wasn't even trying to psych them out”. What was even more amazing was that when he donned the “tools of ignorance”, he had a reputation as being one of the best in the business behind the plate as well, as his manager Casey Stengel praised “Why has our pitching been so great? Our catcher that's why. He looks cumbersome but he's quick as a cat”. 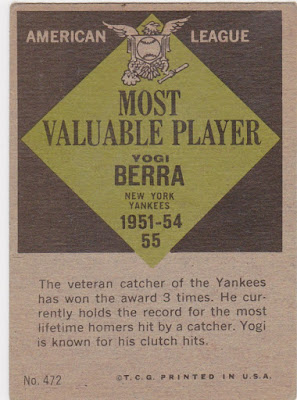 When I picked up the Berra card I thought the subset was complete. But I soon realized that I had crossed Phil Rizzuto off the checklist but his card was missing from the binder. I was 99.9999% sure that I had bought one early on in my pursuit of the set but I sure couldn't find it. I went thru every box I could lay my hands on and then remembered that checking my purchase histories on various sites was a lot easier than shuffling thru stacks of cards. No Rizzuto purchases appeared so I wrote it off to loss of brain cells and picked one up cheap on COMC. 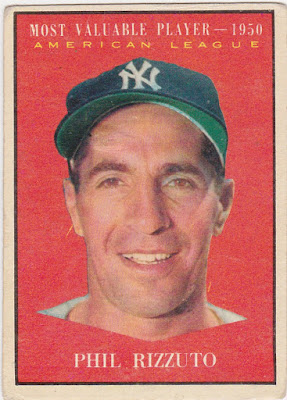 I never saw Rizzuto play but his prime was right in my Dad's wheelhouse as a fan and he was always talking Rizzuto up. I knew him as the Yankees' broadcaster and I always enjoyed him. He had a lot of stories and sometimes the game we were watching took a back seat to some tale of a Joe DiMaggio hit or something.

He played eleven full seasons as the Yankee shortstop. Prior to a three year service hitch during WWII he hit .304 and .284 in two seasons the Bronx. When he returned his only year to hit above .275 was his MVP year of 1950 when he hit .324 with a .418 OBP. That's sixty points above his career batting average. 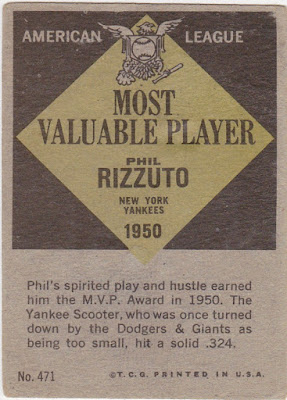 With the '61 MVP subset done I'm in the market for another goal but I may wait until I clean up the 1960 set. I'm nearing the end of that one.
Posted by Commishbob at 9:19 AM